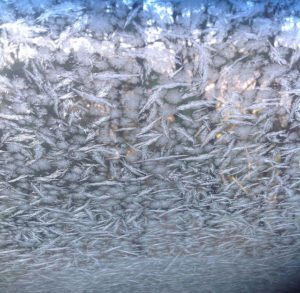 Peak Recovery & Health Center is the new venture of our club’s leadership, Colin Cook and Jim Piper. Their mission is to provide services to people with chronic pain or illness to help them achieve a recovery-focused lifestyle. The center offers photobiomodulation, infrared sauna, compression, float pod, and cryotherapy (whole body and localized). I visited recently to try out whole-body cryotherapy.

Here’s what the whole-body cryotherapy (WBC) experience is like at Peak Recovery & Health Center. You go into a changing booth and strip down to your underwear and don a plush robe. Then you put on gloves, socks, and booties. The staff gets the cryochamber ready for you by placing removable blocks in the chamber floor to adjust it to your height and by choosing the desired temperature between minus 150 and minus 200 degrees. I chose three minutes at minus 200 degrees. The cold is achieved by liquid nitrogen. The nitrogen turns to vapor on contact with air, so while you are in the booth, you are standing in very cold nitrogen gas. When they have got the chamber ready, you step in and they close it around you. You remove the robe (but keep the gloves and booties on) and hand the robe back to the staff member. Then you have to keep moving, because the chamber is equipped with a safety system that turns it off if it stops detecting movement. They also clip some sort of sensor to your earlobe. You can satisfy the movement requirement by just turning back and forth the whole time. For the first two minutes, I found the experience less shocking than a season’s first open-water swim in a wetsuit. But in the third minute, the cold began to make itself felt, and I had to remind myself — as I’ve done in so many workouts — I can stand anything for one minute. At the end of three minutes, they turned off the nitrogen and handed me back the robe. I put the robe back on, stepped out of the booth into room temperature, and felt a mild euphoria that was at least partly due to getting out of the cold.

But not all of the euphoria is due to relief. Some of it comes from the release of endorphins and adrenalin. And the real benefits come in the days following the treatment. In extreme cold, your body initiates a flight or flight response, redirecting your blood to your core and vital organs. The theory is that this process increases the levels of oxygen and anti-inflammatory proteins in the bloodstream, which in return accelerates the rate of tissue repair and reduces inflammation throughout your body.

The day after the treatment, I thought I could discern a reduction in the level of lower back pain I usually experience in a five-mile walk with the dog. The effect was subtle, but I am an old guy and used to back pain, so I’m attuned to its absence. I also noticed that my energy level did not fall off as precipitously near the end of the day. But here’s something that wasn’t subtle. On the third day after my treatment I had to have blood drawn in the early morning for my annual physical. The phlebotomist put a bandage over the needle stick. I’ve done this dozens and dozens of times, and usually when I peel the bandage off at the end of the day, there is a tiny red spot where the needle went in and sometimes even a small bruise. This time, however, I had a workout about an hour after the blood test and got a shower right after, so I peeled the bandage off about two hours after the needle stick. There was no bruise, no red spot, nothing. It was if I’d never had the test. I spoke with my doctor about it during the physical. He said it was a coincidence — but he’s never had cryotherapy.

Nearly all the clinical tests of cryotherapy have involved multiple treatments. So I’m going back for more. I think the admittedly subtle benefits I realized from the first experience could be just the beginning of a healthier life.