Colin Cook, Chris Veilleux, and Craig Thomas battled hot end-of-June conditions at the 2013 Syracuse 70.3 triathlon. In the end, all 3 crossed succeeded in crossing the finish line, but not without their fair share (and then some) of adventure. Here’s how the race played out. 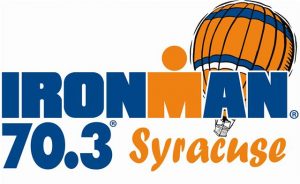 A review of the profile of the coarse 2 weeks before race day I found out that there are a lot of hills in Syracuse. The day before reviewing the run confirmed my worst fear. I have had Achilles problems earlier in the year so I had avoided any hill runs. The weather forecast was for Hot/Hot (same day as the Greater Nashua Sprint Tri). -Criag

Not my best swim and I was disgusted when I saw my time coming out of the water, but this course was definitely long. Even the pro’s were at least 1-2 minutes slower than normal.

I veered off to the left a bit on the way to the first buoy, but besides that, this was a decent swim. I had minimal contact and did a very good job of not going out too hard. However, I didn’t really find a rhythm until the last turn in towards the beach. I was shocked when I looked down and saw a 32 on my watch, but oh well. -Colin

These same sentiments were echoed by Chris.

Had what I thought was good swim. I felt fast in the water and swam a straight line from point to point. I felt like my time would have been in the 33-34 range and was surprised to see my time when I exited the water. From what I understand is the course may have been a little long. Colin had it at 1.31 miles and everyones time was a little slower.

After a tough start, things just got tougher on the bike.

The first 12-15 miles have a lot of climbing. As a result, I knew I needed to be strong through this section but at the same time I couldn’t over do it. Since I started so late, I passed tons and tons of people… However, I did start to fade a bit at about mile 35-40. I knew it was going to be a tough run, especially with it being so hot, so I did tone it back a bit. -Colin

Colin suggested to go out slow and I did (or so I thought). At mile 12, the big assent of 1000 feet was over and I felt as though I was in good shape. Just get into a grove on the bike and then it would be the killer hill on the run coarse. At about mile marker 20, I still had not found a grove. There were more hills, and I started to get a sense that I might have gone out too hard. At mile marker 30, I started to “believe” that I was getting into a grove. Colin had passed a while back but Chris had not. That was short lived though. By the time I finished the bike I knew my race was just a fight to finish… The hills beat me up!!!! -Craig

By this point, the conditions were taking a real toll on all 3 racers, but they weren’t about to let that stop them.

Got off the bike and my stomach was a bit off. In the past when I’ve had this feeling and I’ve tried to push the pace, I’ve ended up with stomach cramps. As a result, I backed it off a bit until they passed. I ended up going pretty easy up through the turnaround which included the big hill. It is pretty long and steady, but really wasn’t that bad. I slowed my pace quite a bit on it, but ran throughout. But it was HOT! I did my best to keep cool and did pretty well with it, but there wasn’t much shade and there were already tons of people walking. I picked it up a bit on the second loop, but for some reason I was struggling a bit with motivation. It was hard to tell where the other guys in my AG were, especially considering we started in 2 waves, but I just couldn’t get myself to dig deep like I normally do. My last 5k or so ended up being the fastest segment of the run for me which is a good sign. However, I wasn’t running a marathon, just a half marathon so I should have pushed more. -Colin

And here it was, I got about 1.5 miles in on the run and developed severe stomach cramping and started dry heaving. Not sure what went wrong, maybe dehydration. Basically whenever I started running my stomach started cramping and I started dry heaving. It sucked because my legs felt great and I know that I should have been able to put in a good run, but my stomach just wasn’t allowing me. So, it became more about a finish than a PR, so I pushed through. Walked most of the run and forced myself to run the last mile even with all the cramping and heaving. After I finished, I almost passed out walking back to transition but was able to get a race directors attention and he got me a quick ride to the med tent. A volunteer ran and grabbed all my stuff from transition (in a huge thunder and lightning storm) and I spent about 25 minutes in the med tent hydrating and bringing myself back to life. -Chris

I ran out of transition and started up the first hill (just a small one). I knew at that moment I would need to fight the whole way to finish. I decided to walk the up hills and jog the flats and down hills. After completing the first hill, I did get into a light jog but just didn’t have it. Colin just past me on his second lap of the run and tried to inspire me. Not sure what happened, but I was on empty. I tried to run but got only about 100 yards before I had to stop. No stomach problem, no cramps just worn out. I proceeded this way for most of the race knowing that I had 13.1 miles with some large hills. Chris went by 3 times and gave me encouragement but could not muster much. I did manage to jog in most of the last 2 miles. -Craig 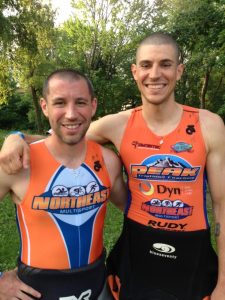 Despite the hot conditions and a massive thunderstorm that shut everything down before awards were given, the day was not a negative experience. Colin’s time was fast enough to earn him a qualifying spot to the 70.3 World Championship in Las Vegas. Craig learned (or relearned) the importance of hill training, compression socks, and proper nutrition. And Chris summed his tough day (something all triathletes experience) perfectly:

It wasn’t the race the I was hoping for but these things happen and you just have to be able to deal. I’ll take that as character building and a humbling experience. Nothing is ever in the bag… Looking forward to a comeback at IM Lake Placid!