August 18th and 19th marked the latest running of the Timberman 70.3 and Timberman Sprint triathlons in Gilford, NH. Centered around Ellacoya State Park and the Gunstock Ski Resort, these races are known throughout New England for beautiful scenery and punishing hills. Given the challenging nature of the bike leg, especially the 70.3 course, these aren’t the races most people take on as a first-time challenge or use as a launchpad to a PR, yet that’s exactly what our NEMS racers did.

Saturday, the morning of the sprint race, started off dark and rainy. And while other racers were looking for ways to wake up and get the blood flowing, Bryan Lemire’s wake-up call came to him. Here’s the story in his own words:

I arrived at 4:30 this morning and needed to use the port-o-potty. As I’m in there I hear a diesel engine getting closer and closer to me. It then sounded very close to me and suddenly I felt the entire port-o-potty shake. I immediately tried to open the door but couldn’t open it more than two or three inches. I was trapped inside by a forklift. At this point I’m yelling and pounding on the door. After a couple seconds I hear the beeping of the backup warning and I’m finally able to open the door. That certainly got me wired for race time!  I read the driver the riot act though…

Fortunately, the rain stopped before the gun, but the roads remained wet. After a swim in the clear water of Lake Winnipesaukee, and a hilly ride on country roads, racers were treated to a run that is slightly uphill out to the 1.5-mile turnaround and a corresponding downhill to the finish that’s tailor made for negative splits.

In addition to Bryan, NEMS was represented by Larry Rodman, Frank Mulcahy (set a PR), and Michelle Poublon (1st place in her age group). 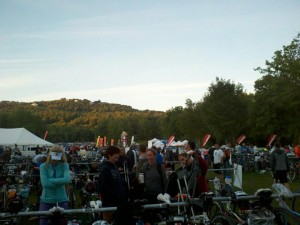 Sunday morning saw 1700 athletes return to Ellacoya State Park for the 70.3 race. The air was filled with nervous electricity before the start, especially for NEMS members Tom Frost and Craig Stoller, both taking on their first 70.3 race. Here’s how the day unfolded in their own words.

Tom—1st Half Ironman after just starting triathlons this year. Thought I was in great shape to hit my sub-six hour target through the bike. Got off the bike and my back seized up on me and I could not stretch it out. Ran entire half marathon in a great deal of back pain and finished with a 6:15 time.

Good News?  I finished the most trying physical event of my life and signed up for a full Ironman (Mont-Tremblant, Quebec) in 2013. 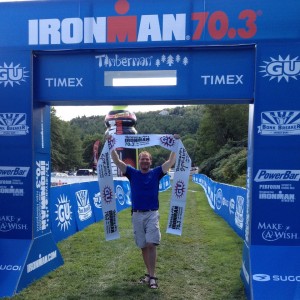 Craig—This was only my 2nd Triathlon and my 1st half.  I learned a lot in this race and planning on running a lot more Triathlons next year. I have been swimming for 4 months, biking for two years, and running for 38 years (first marathon at age 13).

The Timberman is a great race and would recommend it but make sure you have done hill training on the bike.  Before the start of the swim was fun talking to other competitors and was amazing to watch the Pros start the swim.  Was in the 4th wave and very interesting swimming is such big packs but did survive and swam at my goal.  The bike was much more crowded then I had thought would be for 56 miles and at some points forced to ride in packs.  It was fun that would be going back and forth with passing of the same people and got to know some.  For one person it got to the point that when we passed  we would say  “tag your it” when passing.  Around mile 48 had a big downhill going 48 to 49 miles an hour (what a rush).  Was not happy at the end of the bike as last part had to go single file, no passing, which was OK as most going the same speed; but just as going into the no passing zone one to the riders ahead got a flat.  The rider continued to ride but slowed way down and would not let us pass.   In the transition had to run a maze before getting to the official start of the run.  Being a marathoner did well on the run but wanted to do better.

First-time 70.3 finishes are reason for celebration, but what do you do when you’ve already raced a half-iron and spent all summer training like mad? Tear ass through the hills and set a PR. That’s exactly what Chris Veilleux did, besting his previous best 70.3 time by more than 8 minutes and showing that he’s well on his way to finishing his first 140.6 at Ironman Lake Placid next summer. Way to go, Chris! 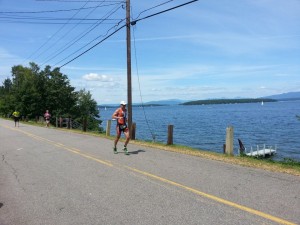 Rounding out the impressive day for the club was Mikael Taveniku, who powered through the hilly bike course in just 2:45 en route to a strong finish. All around, it was a good day and a great weekend for NEMS. Keep it up, team!