Northeast Multisport was well represented at Ironman Lake Placid last weekend with Andrew Levine, Chad Quinlan and Josh Cleland participating in their first Ironman event and Dan Dugan participating in his second in the past 12 months. Additionally, Colin Cook was present to cheer on his group and encourage them to stick to the plan for success that was devised prior to race day was stuck too. Richard Hostler was also present and he spent race day volunteering at the first aide station on the run course. It was a terrific mental boost for the NEMS participants to see a fellow teammate while just starting the marathon and 3 other times along the run.
The weekend started on Friday when all 4 NEMS members registered for the race. 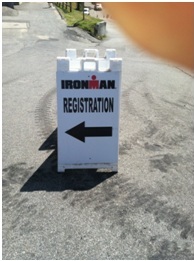 Following registration Andrew, Chad, Dan and Josh returned to their hotel rooms to pack their gear and take in a little R&R. Meanwhile Colin was finishing up a training session which entailed completing the 112 mile bike course. He was really checking the bike course for any dangerous objects that might obstruct NEMS members from achieving their goals of becoming an Ironman the following day.
Saturday July 21st was a beautiful day in Lake Placid with sun, a light breeze and a temperature around 77 degrees. It was time for mandatory gear check in at the transition area at the Olympic Oval. It was an amazing site with all the gear bags hanging in rows and the nearly 2600 bikes in the transition area. 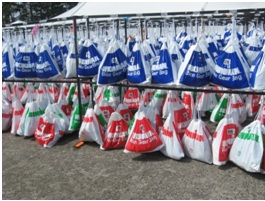 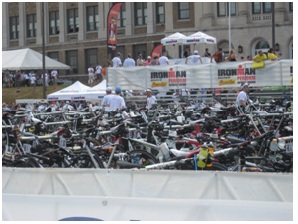 The weather on race day was beautiful and mirror lake was smooth as glass. The temperature of the water was 74.1 degrees so wetsuits were legal for all athletes during the swim. The pros started the swim at 6:50 then it was time for the rest of the field to start at 7am. Although mirror lake was calm at the beginning of the race this was anything but the case when the gun went off and nearly 2600 athletes began the 2.4 mile swim and the start of their Ironman day.
http://www.youtube.com/watch?v=Q8dA1EJAigs
The above is a good youtube vid of the swim start
All NEMS participants had respectable swim times and moved on to the 2 loop 112 mile bike course. The excitement of the day made it difficult to stick to the plan at times but all NEMS members were able to maintain a solid base and not experience cramping issues. The bike also entailed a lot of caloric and fluid intake to be sure the athletes had adequate energy to complete the bike and run, which at times can be difficult. By the middle of the bike course the temperature approached 80 degrees and there was not a cloud in the sky. 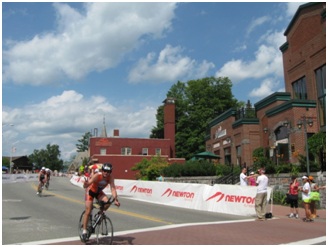 Once the bike was complete it was on to the 2 loop marathon. The temperature appeared to increase during the first half of the run but at about that time some clouds rolled in which started to bring the temperature down which was a well deserved respite from the sun. 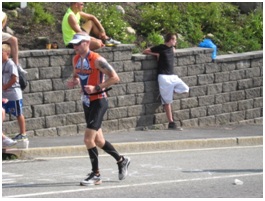 Despite the pain associated with completing a full marathon all NEMS successfully completed the course and on July 22nd 2012 became Ironman in respectable times.
1. Andrew Levine: 12:05:57
2. Chad Quinlan: 12:18:02
3. Josh Cleland: 13:07:12
4. Dan Dugan: 13:46:36
Exact details of their individual times can be found here.
http://ironman.com/events/ironman/lakeplacid?show=tracker&race=lakeplacid&year=2012#axzz21eBy1Q5Q 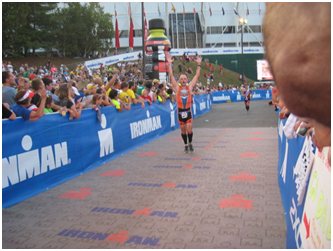 Here is some video from the action: