On Saturday June 4th NEMS members Chad Quinlan and John Jenkins competed in the Olympic distance race  and on Sunday Adam Crowley, Dan Dugan, Nancy Epstein, Zuzana Trnovcova, and Geoff Moodie competed in the Half Ironman.  It is a very tough course and a great weekend for NEMS racers.

On Saturday Chad Quinlan had a solid day placing 13th in a very tough age group and 77th overall.  This was Chad’s first Olympic race and he had some solid run & bike slits, while also greatly improving his swim.  John also represented NEMS well and finished 57th in his age group.

Here is a picture of Chad and John before the race: 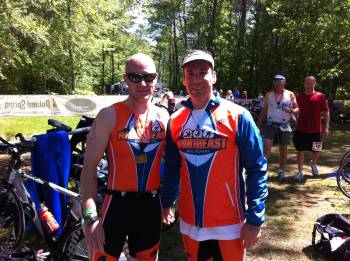 Sunday was also very good for NEMS racers.  Adam Crowley had a great day, coming in under 6 hours with some solid splits.  Dan Dugan also came in well under 6 hours and finished 63rd in his age group with a great swim.  Nancy Epstein had an excellent race as well coming in 27th in her age group with some very consistent splits across the board.  Zuzana also had a very strong performance coming in 12th in her AG and breaking the 6 hour mark.  This was Geoff Moddie’s first attempt at this distance and did a great job completing the race.  Here is a pic of Adam and Nancy after finishing: 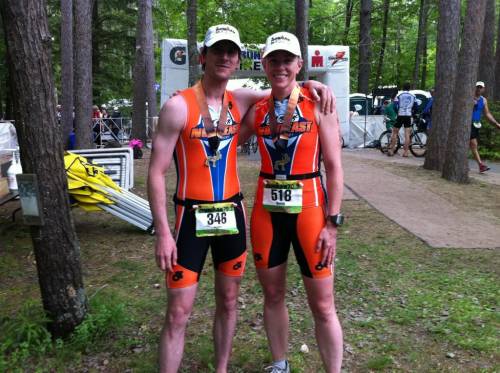 NEMS’s Patrick Burek also officially become a triathlete over the weekend.  On Saturday, he completed in the Escape the Cape Triathlon in Onset Village in a very respectable 1:11:04.  Way to go Patrick!

Great job to our all members this weekend!